Doors opened as usual at 14:00. As usual there was a brief online workshop to practice different ZOOM functions. 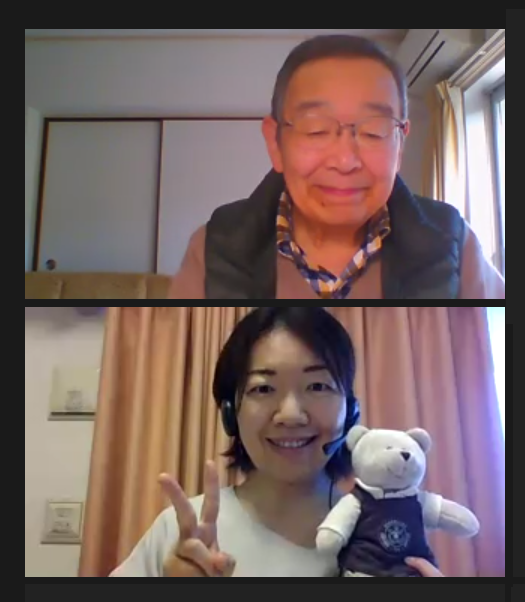 President called meeting to order at 14:20. Word Master announced Today’s word of the day: prominent. The word of the day is the word to be used intensively during the meeting.

(The photo of President and TM M.H She was awarded a record-making double awards: Best Table topics award and TMOD award. Congratulations !!)

1st Speaker was TM M. H.: Her speech titled, “Can you feel life energy from electric devices”. She like animals and plants because she can feel life energy. But she was hired to IT company because of employment ice age, she experienced work in software development and sales division. After that, she can say “I can feel energy from electric devices”

2nd Speaker was TM T. K.: His speech titled, “Researching for Taiga drama”. He was interested in NHK Taiga Drama. Taiga drama started in 1963. He explained some popular fine works and the history of Taiga drama. He said “He want to enjoy the background and people through Taiga drama.

At the Evaluation Session, TM M. H evaluated first speech, and TM T. O. evaluated second speech, pointing out areas that are commendable as well as these for improvements.

Table topic! This program is to answer to the given topic questions in the form of a 2-minute speech. Table Topics master, TM Y. U has to make 10 questions. It was difficult work.

He asked something affected by the new corona virus.

#1 How do you feel Spring and Summer National High-school Baseball Championship?

#3 What do you think about Tokyo Olympics Game postponed for next year?

#5 What are you going to do while restaurants closed?

#6 What do you think about pachinko parlors closed?

#7 What make you complain about separating your family structures?

#8 Please tell us something unexpected happened to you.

#2 One member tried to access to online, but he could not. So, after meeting, instructor TMM. H followed him.

Best table topics Award went to TM M. H.
Her speech was made on Question 8 on good phrases.
E. M